Reading about her is like touching the rim of a black hole whose gravity wraps around you like delicate gossamer, and you start to feel like you can faintly see through to the other side and that you might escape being human after all.

ever since a few years ago when i watched beetlejuice for probably the first time as an adult, ive been wondering what-the-fuck at one specific minor detail in the story of that movie: why, when the characters try to leave the house and are suddenly transported to a desert world with sandworms, is it explained that they were just on Saturn? like, Saturn the planet?

i had looked this up before and found that apparently in the original script, it was written as Titan, the moon of Saturn, but they changed it -- to Saturn, which makes absolutely no more sense: for a movie that doesn't take itself seriously otherwise at all, has no problem transporting characters to nether-realms and silly takes on an afterlife, it seems bizarre that they arbitrarily chose a real, physical place in the non-afterlife that's simply far away -- a barely-known moon of a planet, no less -- that's got nothing to do with anything, and decided that it's inhabited by giant sandworms. The editing of the script from Titan to Saturn only makes it weirder, since apparently there was enough of a discussion over this to change it, yet not to something that has any more of a connection to the rest of the movie's world or theme.

so i just googled this again and i found this blog post and apparently other people have been wondering about the same thing.

Of course, the fact that i've been known to laugh at schizoid-magnet film conspiracies doesn't make this moment ironic; it cements me as the touchstone for reason 😏 and also highlights that there is, in fact, something going on here.

what happens at the end of humanity? can i really be the hero?

just as people oscillate though the spectra of their needs (like, but obviously not exactly, maslow's hierarchy), a society does too. a successful society is able to raise the floor of its society's needs.

the frontrunners of humanity, the first-world, as of this writing, are currently bottlenecked at sex: so many things that people do are just roundabout pursuits of more sex, because all less-critical needs are already met on a societal level (finding shelter is solved, acquiring food is so thoroughly solved that for some people it's a pathology, medicine is mostly solved). sex is the next tier of desire that's not yet fully solved.

what comes next? and what does the very end look like?

the need for altruism commands billionaires to philanthropy in an attempt to uplift the impoverished world. at some point, the market, so to speak, will reach maturation, and there will be fewer people left to help in the world than there will be philanthropists. there may be a period of an esteem-crisis, wherein a general malaise overcomes the entirety of society, as people no longer have a sense of utility or helpfulness. the "bored billionaire" syndrome will be society's bottleneck. out of desperation, some people may even create chaos just so that they can be credited with solving it.

in keeping with humanity's trend of incorporating ever-more technology to address problems, the solution may just be the simulation: plug yourself into an instanced world that's worse than reality. this time, you're given much higher stats than you were in reality, and/or a super-high Luck skill; you progress through life in the simulation, and there are challenges for sure, but things just always seem to work out. Of course they do, because you're the hero; the monomyth.

Back in reality: your sense of self-actualization (your most abstract psychological need and last unmet need of all), is satisfied. AI programs are always carefully recalibrating the difficulty of your challenges in your simulation, pushing you to your limits such that whenever you think all hope is lost, your own ingenuity and spirit and determination leads you to prevail.

but in order for that to work, you must never know any of this, because you don't even know you're simulating at all. so then what's the point? it's all fake. why not just plug into a dopamine machine?

yes, why not. maybe eventually, it will become clear that living itself has become a novelty. humanity will have solved all of its problems. maybe it will feel that there's nothing left to do but shut it down, and probably leave some wisdom out at some schelling point, just in case some other beings one day stumble across it (to fulfill one last act of altruism and mitigate the death anxiety).

over the weekend we had our live show and costume party. i have a lot of footage to go through and stuff. but it was one of the best weekends of my life. now i remember just how depressing everything else is. and how hard we try to squeeze some satisfaction from whatever we can the whole rest of the time.

your life is not a story

I visited my grandmom at this nursing home place today for the first time
she just moved in there, into the dementia ward, for physical therapy but might end up staying there permanently
it was terrible
at lunchtime we sat out in this common area and i looked around at these poor people who looked mostly like some zombies
guess i never really felt for those kinds of people until my own grandmom became one of them
it's a pretty horrible conclusion to it all, it really is
like we had a great life together, most or all of my best memories happened with her and in her house, and she was really one of my best friends
i imagine that losing somebody suddenly and unexpectedly, like in a car accident or whatever, leaves you with its own set of "why didnt i savor the time" types of regrets, but i have plenty of those anyway, plus the issue of watching her devolve into a different person who sometimes confuses me with my brothers (which is the worse of the two).

summary: there isn't one. there's no advice that you could possibly glean from this that isn't cliche. your life is just some events in sequence, not a story.

p.s. but the best thing i can offer is that you might want to figure out what's definitely important to you, definitely to you, and find a way to do it that makes it feel like one lifelong project, one that's continually being built, one which asserts that at one time, you existed, and that this is who you were. [creates 'long-term happiness' vs. 'short-term happiness'/fun/hedonism?]

Boost your Discord server for onwy ten dowwas per monf :3 you can haz some extra emojis and a custom backgwound uwu;

And for da bargain of da centuwwy you can haz a customized* permawink*** for onwy... 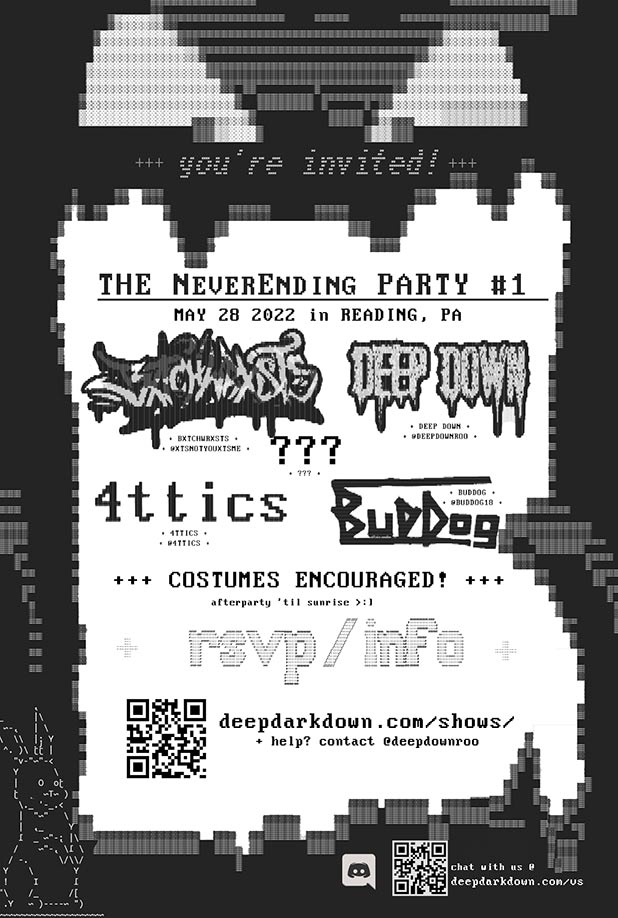 da future is a technocwatic videogame progwammed by manchildren nanniez and you are never awwowed to decide for youwself who da good guyz or bad guyz are :3